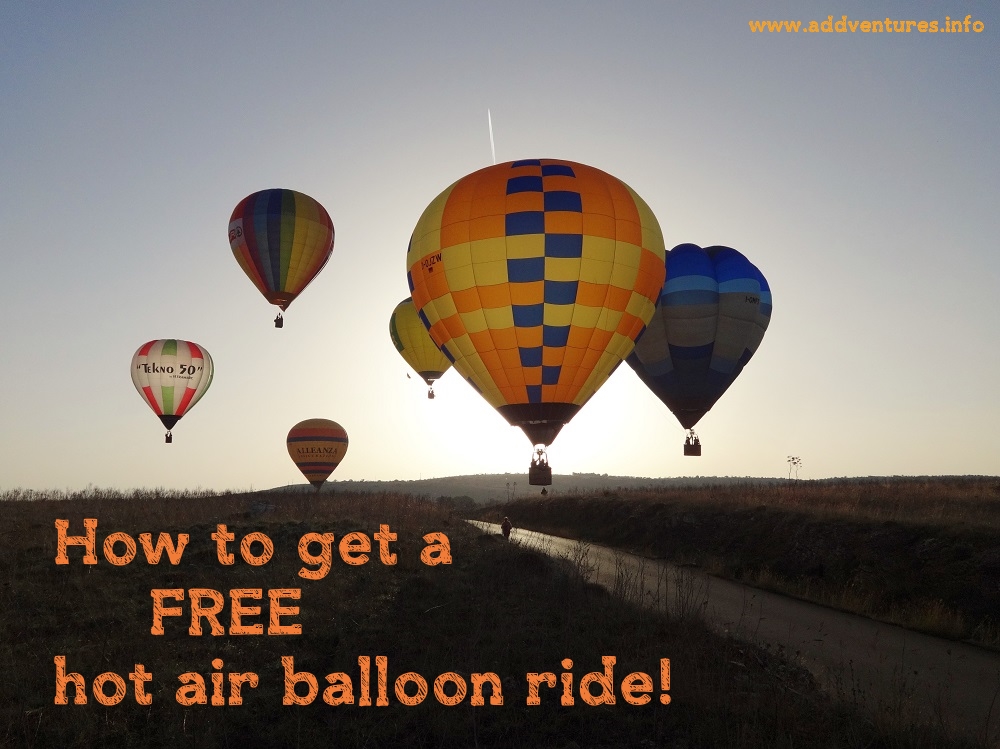 Instead of spending the days between Christmas and New Year in my usual fashion (i.e. watching Julie Andrews musicals and attempting to eat as many mince pies as physically possible), this year I opted for something a little different. A hot air balloon festival in the foothills of the snowy Alps. True, spending New Year’s Eve with a Bavarian oompah band accompanying your dinner might not be for everyone, but sometimes it’s worth it.

Flying in a hot air balloon is usually seen as a luxury experience and is included in bucket lists, top adventures and 1000-things-to-do-before-you-die-lists galore. It’s not a cheap experience and often costs around £200 or more per person, especially in some of the picturesque surroundings that I’ve been to, such as the UNESCO World Heritage town of Matera or the snow-capped mountains and frozen lakes of Austria. But I’m going to tell you a secret – you don’t have to pay sky high prices to get into the sky!

If you have a bit of time and are prepared to sacrifice a few morals, I’ll tell you how to go hot air ballooning FOR FREE!

(IMPORTANT: If you like the partner you’re with now, you may have to rethink quite how much you want to go ballooning) 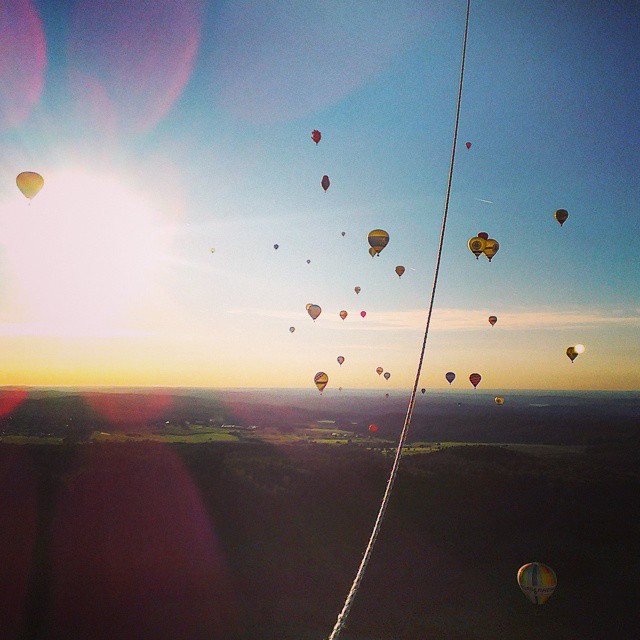 First off, find your nearest airfield. From here, find an attached aviation club with a hot air ballooning branch. At some point they’ll have an open day, display or event of some such which you should attend. Mingle.

Since hot air ballooning is a pretty expensive hobby to have, most of these clubs will invariably be populated by people over 50. These people are your allies. Befriend them. Find out which ones have children (preferably single) in the age bracket you prefer.

The next step requires some creativity and perseverance on your part and I can’t really help you with the finer details, but the end goal is to start dating one of these children. 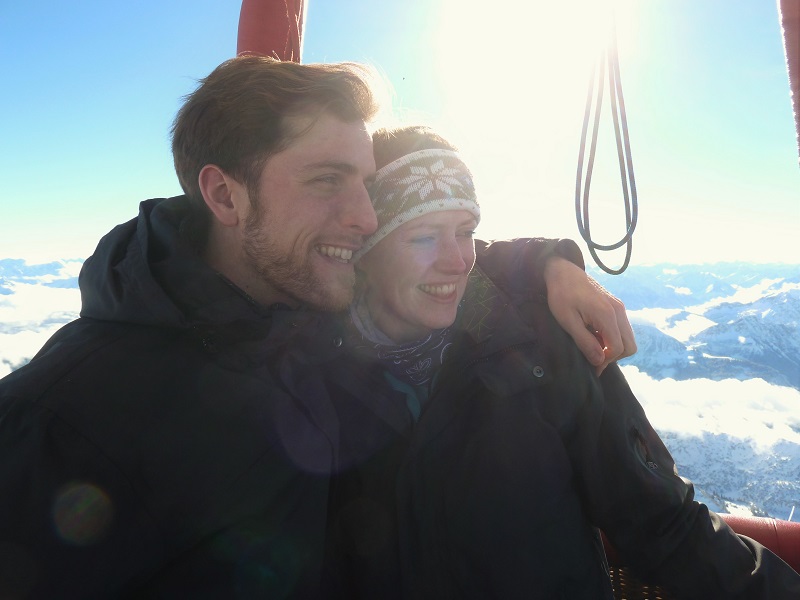 Ideally, they should be interested in hot air ballooning. Even better if you like them enough to want to spend a week with them and their parents. Show interest in the sport of hot air ballooning, try not to be too obvious.

Eventually, there will come a time when the person with a pilot’s licence will want to attend an event or maybe even a festival and will need some crew to help out. Volunteer.

This is where the fun begins. 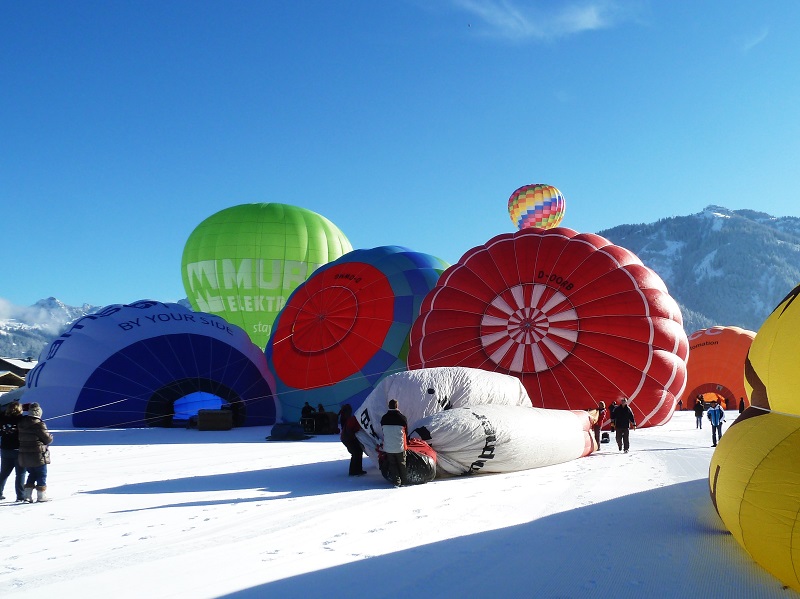 If you’re aiming for a morning flight, expect a very early start. The launch field in the morning is a pretty magical place. It’s an hour before sunrise, everyone is simultaneously still half asleep, tense with nervous excitement and yet trying to look nonchalant about the whole thing. Even the most experienced pilots get a rush, no matter what they may try and tell you. Discussions are largely fixated on comparing weather reports, trying to remember the details given in the briefing when everyone was struggling to stay awake because it was 5am and the coffee hadn’t been handed out yet and discussing the pros and cons of various GPS apps, altimeters and other technical contraptions.

For your first time as balloon crew, expect to feel a bit useless and just do whatever more experienced people tell you, mostly fetching things from or taking things back to the balloon trailer, helping to lift extremely heavy things (balloon baskets, tonnes of balloon silk), laying out the balloon itself or holding the balloon open as it fills with air. This last one is one of my favourite jobs, because it looks like you’re doing something important, but really you’re just holding a piece of material and hoping not to get your foot caught in the wires. 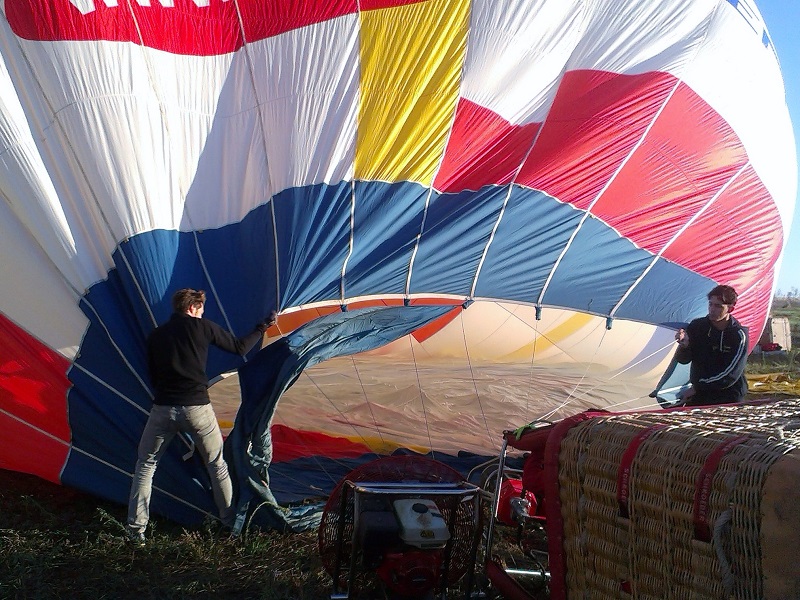 After the hesitation and sleepiness of the first set-up phase, once the balloon is more than halfway inflated, things really start to pick up speed. The pilot ignites the burners, blasting hot air just a metre or two from your face. The basket is secured to the car, guests have to be collected, other balloons are taking off around you – don’t forget to keep an eye on where they’re going! Then suddenly the balloon is lifting up, pulling the basket upright with it, someone comes running from the other end of the field with a rope from the top of the balloon to be attached to the basket, lines are put in place, guests are helped to climb aboard and the final checks are made. Run to the car for that last forgotten bit of vital equipment. The balloon strains at the rope attaching it to the car. The official all-clear is given and with nothing more than a puff of hot air and the click of a carabiner system releasing, the whole thing is in the air, headed swiftly skywards. 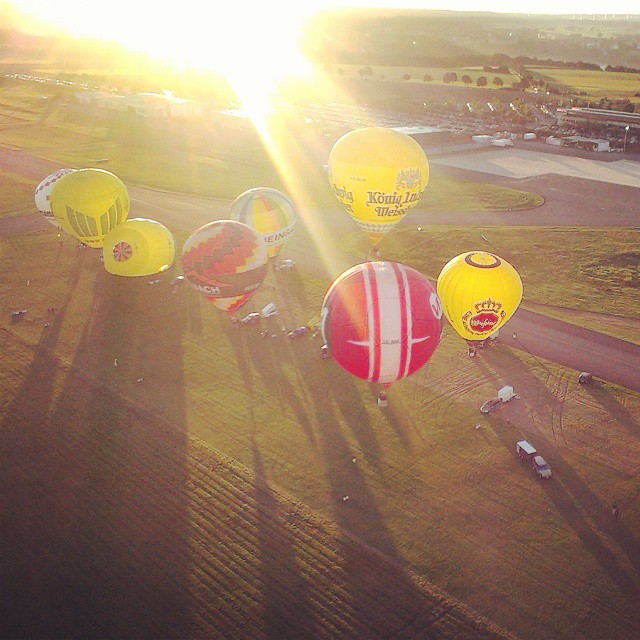 Left on the ground, you have to gather up the ropes and ventilator, close the trailer and get ready to chase the balloon through the countryside. As “balloon chaser” it’s your job to find the balloon as soon after it has landed as possible. This bit can also be pretty fun, particularly if you don’t have to do it alone so one person can drive and the other can look out for the balloon and check directions. You’d be surprised how quickly such a large object can disappear from the sky!

Once the pilot has decided to come back to terra firma and has been reunited with the chasing car, there’s more work to be done. The balloon is laid out, all the air is squeezed out of it before being rolled, hauled, shaken and shoved back into the big bag it came in. The basket is disassembled and returned to the trailer. Expect to get a bit muddy. Wear gloves.

First-time flyers in Germany will get baptised to mark their bravery in remembrance of the early days of hot air ballooning when only members of the nobility were allowed to fly. You get given a long and silly name to remember (the penalty for forgetting is a round of drinks) and a series of “responsibilities” (serving the pilot as ballast, always helping another balloon after landing, always using the word “fahren” (travel/go) and not “fliegen” (fly)), whereby the penalty is always a round of drinks. Sadly, this tradition hasn’t apparently crossed the Channel to England (yet). 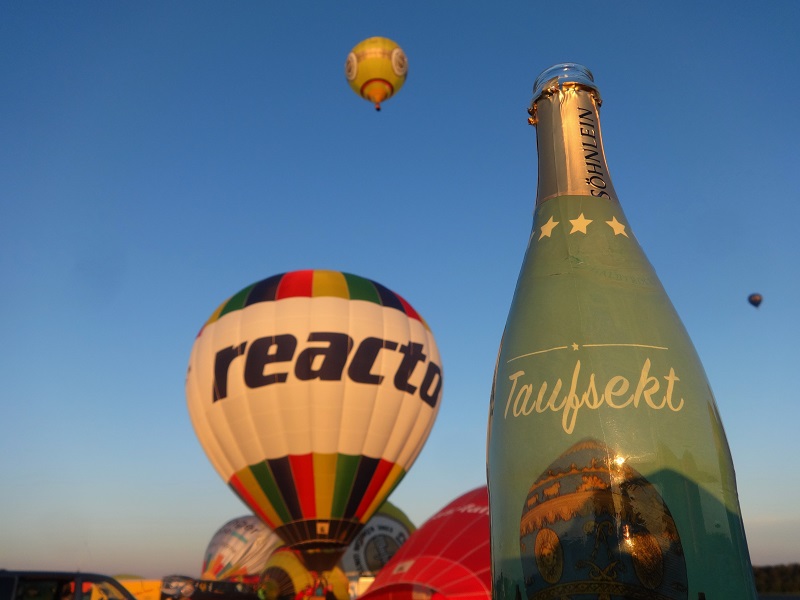 Depending on how much your potential in-law/hot air balloon pilot of choice likes you, you may have to be ground crew for a few flight before actually getting to go in the basket yourself. Because I’m awesome, I got to go up on my first time!

Have patience my friend. In time, you will be the one clambering into the basket in the pre-flight frenzy. Seemingly weightless (although you know it’s not true, having already attempted to move the basket yourself and failing miserably until three other people help you), you lift away from the Earth, ready to be taken wherever the wind may blow you, not knowing where you’ll land, but knowing that you are privileged to be doing something that is, contrary to what the event organisers and luxury travel companies might tell you, is actually priceless. 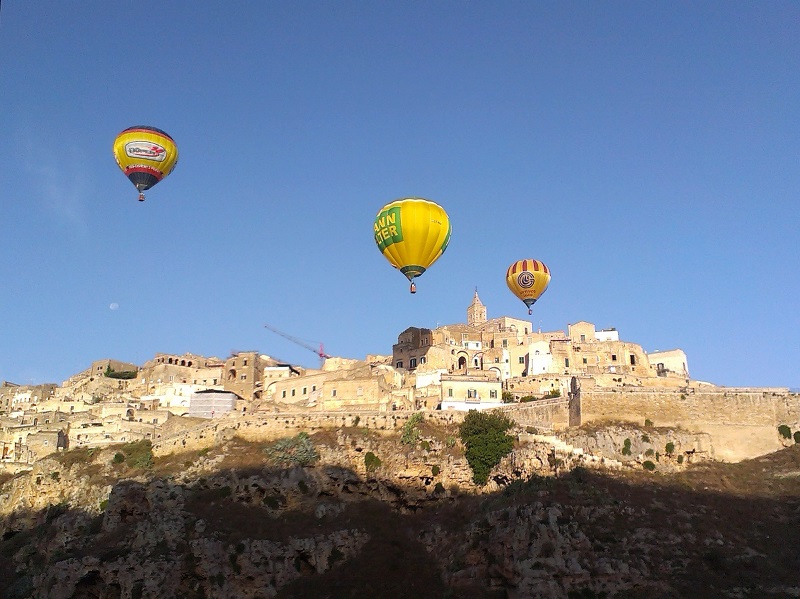 And who knows, maybe you’ll end up liking that boyfriend you chose just because not only his mum but also his sister happened to be two balloon pilots enough to stay with him and go on multiple hot air balloon-related trips to different countries (sometimes even without that pesky boyfriend!) and see the world as only very few people are lucky enough to get to see it. 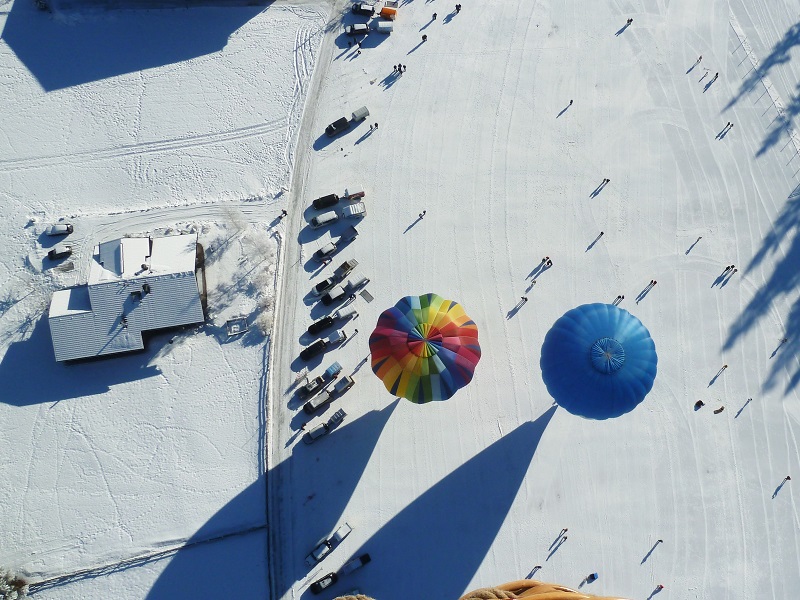 Thank you Silvia and Anna Lena (and Matthes) for allowing me to take part in ballooning events with you and for taking me with you over the Alps, Ferrara, Matera, the Sauerland forests and the Bavarian lakes. I hope you’ll still take me on many more trips to come!

Matthes – sorry, but now you know the truth … 😉 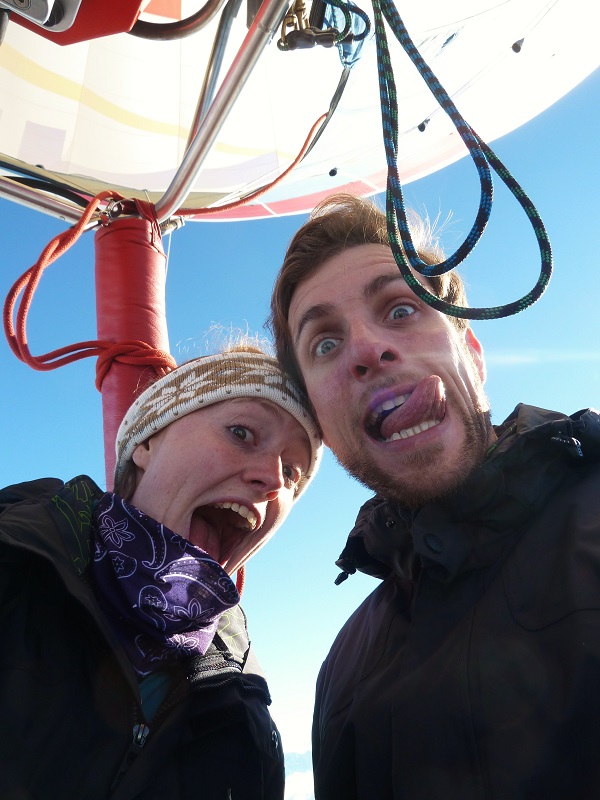 One thought on “How to go hot air ballooning for free!”